This blog post is part of the series Implementing a brainfuck CPU in Ghidra:

More posts may be added to this series in the future.

This is already the third post in this series. This time we’ll complete the decompilation part of the processor module by adding semantics for the I/O (. and ,) and control flow ([ and ]) instructions.

in and out can be used in SLEIGH semantic statements using using functional syntax (calling them like a function, e.g. f(x)). The following statements are all valid (assuming x, a, b and c are defined):

It is even valid to call an operation with one operand first and later with two:

Most of these don’t make sense. Only x = in() and out(x) make sense. in should not take any input and outputs one value. out is the opposite: it takes exactly one input and does not return anything. There is no way to enforce this using the specification. It is the task of the language creator to do this.

This is because p-code operations can have at most one output varnode.

Let’s see how we can use our newly defined p-code operations to define the semantics of the . instruction and later of the , instruction. The . instruction does the following: it takes the value of the current cell and outputs this value.

You can also write out(*[ram]:2 ptr);, if you’re feeling brave. In my opinion, this reduces readability.

The , instruction takes input and stores it in the current cell:

We can test these instructions using a simple program called add3.bf. It takes user input, adds three to it and outputs the result:

Compile it (./bfc.py add3.bf add3.bin) and open it in Ghidra. The disassembly will look like this: 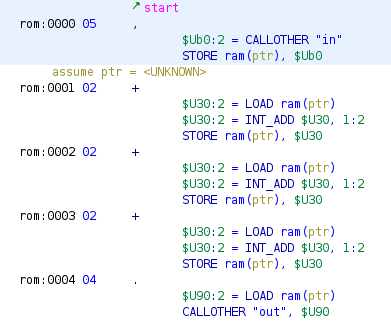 Where $U90 is the varnode in the unique address space corresponding to the symbol c.

In the decompilation, these user-defined p-code operations are represented by functions:

An interesting thing about this decompilation is that the order of execution is not preserved. In the decompilation, out is called before the value is written to memory. An order-preserving decompilation may look like this:

The decompiler is free to move statements around as long as it can prove the outcome is the same. In this case, the output is preserved: in both cases the result of in() + 3 is written out using out and written to ram at address 0x0000.

Implementing the I/O instructions was the easy part. The implementation of the control flow instructions is a bit more complex, because of the unusual branch implementation of brainfuck. Common architectures have branch instructions that encode an absolute or relative address for the CPU to branch to. Brainfuck doesn’t encode the branch destination in the instruction itself. Instead if it encounters [, it may jump to the corresponding ], depending on the current cell value. If it encounters a ], it jumps to the corresponding [. Compare the following brainfuck code to its (unoptimized) ARM (ARMv6-M Thumb) equivalent (r0 is ptr and r1 is a temporary register to hold the current cell value):

The ARM assembly may look complicated, but it produces a nice decompilation1:

The beq instruction looks as follows:

The p-code for these ARM instructions is very short because they have an almost one-to-one correspondence with their p-code operations. The control flow graph of the program looks like this:

The brainfuck variant of the program looks a lot simpler, but its p-code is more complicated. Let’s model the semantics of the [ instruction. We’ll restrict ourselves to the context of this program, which means that (a) there are just two control flow instructions in the entire program (one [ and one ]) and (b) the cell value at the [ instruction is zero, so the cpu should always branch to the corresponding ] instruction.

The following code searches for the next ] (opcode 0x7) and branches to it:

This produces the following decompilation for control_flow_test.bf:

The control flow graph of this program consists of just one block, ending with a BRANCHIND to an unknown destination:

Clearly, Ghidra is unable to statically calculate the branch destination of the [ instruction, even though it is statically computable2. Simper calculations in the semantics (with control flow constructs , but without loops) are computed correctly by Ghidra. My guess is Ghidra doesn’t bother computing loops in p-code, although I have not really looked into this (yet). (If there is a way to compute this statically in SLEIGH semantics, please contact me!)

It’s no use continuing to implement the semantics of [ and ] this way. We need another way to statically compute branch destinations that Ghidra does understand. I came up with the following:

We’ll call this memory that holds branch destinations bdest. This memory can be created by adding the following to the <default_memory_blocks> tag in the .pspec:

Expose bdest to SLEIGH by extending the address space definitions in the .slaspec:

The last thing to do is to mark bdest as read-only in the .cspec. Add this to the <compiler_spec> tag:

Without this, the decompiler doesn’t assume that bdest is read-only, even though it is marked as such in the .pspec (mode="r").

Eclipse automatically created an analyzer for us when we selected analyzer in the project wizard during the project setup. It is called BrainfuckAnalyzer.java. The functions getDefaultEnablement and registerOptions can be removed, because this analyzer won’t use them. Change the constructor to this:

The analyzer is marked as byte analyzer instead of instruction analyzer, because it operates on raw bytes before they are converted to instructions so that Ghidra can correctly analyze branches. Read more about analyzer types in the source code.

There are two functions left: canAnalyze and added. We’ll get to canAnalyze first. This function tells Ghidra whether the analyzer can analyze the program. This analyzer should only analyze Brainfuck programs:

added is where the real magic happens. This function is called when bytes are added to the program or during auto or one-shot analysis. It’s responsible for the analysis. We’ll put the main logic in a function called resolveBranchDests and call that function from added, which catches and reports exceptions.

This constructions throws CancelledException (raised by monitor.checkCanceled() when the user cancels the operation) and logs any other exceptions.

Let’s write resolveBranchDests. This function receives a Program and a TaskMonitor and it can throw a CancelledException and a MemoryAccessException. The latter will be raised if the memory we’re trying to write (bdest) is uninitialized. It will not be thrown because we set initialized="true" in the .pspec. It is a checked exception, however, so we must catch it.

These lines get references to memory blocks we’ll be using.

Make sure the bdest memory is big enough:

Initialize the task monitor. We set the maximum progress equal to the size of rom, as we’ll be iterating over the rom memory. It isn’t necessary to use the TaskMonitor, but it provides a more user-friendly interface.

If a branch is unmatched (has no corresponding [ or ]), a custom exception called UnmatchedBranchException is raised.

The rest of the source code can be found here.

Once this is implemented, writing semantics for the control flow instructions is very easy. The [ checks the current cell value. If it is non-zero, execution should continue at the next instruction and this instruction is essentially a NOP. If the cell is zero, a branch should be performed. The address is retrieved from bdest.

The semantics for ] are even easier. It just branches to the corresponding [:

We could have also implemented semantics for ] to check the current cell value and perform a branch accordingly. The current implementation is functionally equivalent to that, is shorter and follows the construction that is commonly used in binaries emitted by compilers (arrows represent branch destinations):

The produced flow control graph for the brainfuck binary after running the Brainfuck Branch Destination Resolver analyzer is now identical to the graph produced for the ARM binary:

It also produces a reasonable decompilation (c0 is cell zero):

The decompiler recognizes the redundancy of +- and it does not show up in the decompilation.

That’s it! The decompiler is now able to decompile any compiled brainfuck binary. Call bfc.py on your favorite brainfuck program and see what the decompilation looks like in Ghidra. One thing that will massively clean up the decompilation is recognizing common patterns. Right now [-] is decompiled to while(c!=0) c--;, while it could theoretically also be decompiled to the more concise c=0;. This is something we’ll take a look at in a future post.

Next time, we’ll make some small improvements to our processor module. See you then!

You can find the final code for this post here.

Feedback, questions or suggestions? Feel free to reach out to me using my contact information in the footer.